Kofi is a 14 year old Chihuahua mix. When he went missing on New Years Eve around 7 PM he was wearing his collar and ID tags and an AirTag GPS indicator. His person told me his eyesight and hearing were becoming diminished.

He got out of the yard by accident when his person came home and drove the car into the fenced yard where the driveway is and Kofi took off without her knowing he was out. An hour later they noticed he wasn't in the house and went out looking for him.

Later that night around 9 PM they received two pings from his collar and went to that area about 45 minutes from the house. A person also told them they had seen Kofi that night. No other sightings or calls were received.

I came out to do the search on that following Friday. I arrived at noon and Asia immediately picked up the scent leading out of the yard and eventually to the area of the two pings and sighting in a neighborhood park. The search continued for another three hours around San Carlos, and it was stopped at the four hour mark. We scheduled another time to come back that Sunday morning.

The next morning early I received a text that Kofi had been found later Friday night after a ping was received by his collar. They went to the location and made contact with the person at home.  Kofi was found deceased inside their pool inside their yard. Somehow Kofi made it into the open yard and unfenced pool and fell into the pool.

Posted by Renting With Rex at 12:29 PM No comments: 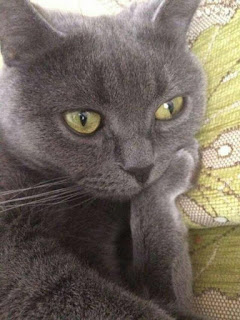 Cosmo is a 10 year old, indoor only, grey DSH with green eyes. He was not wearing a collar but he was microchipped.
There were no sightings of him after he went missing from his home around 8 pm when it appears he slipped out of the garage as his person was taking out the trash cans. It was not noticed he was missing until 5 AM the next morning when his person noticed he wasn't in bed with her. Despite an extensive search of the house and surrounding neighborhoods, no sightings or clues were found.
The track we found led away from the house pretty quickly. There wasn't any going around and around like a normal lost cat. The track led down to Ocean Avenue and then made a right and went all the way down and through Lakeshore Plaza, down Sloat, through the Zoo parking lot and how to the Great Highway. The search was stopped at 4 hours and we got a ride back.
It appears he was picked up during the night probably by people who regularly search recycling cans. It is common for them to pick up cats since cats are small and easy to carry, making them nice companions for transient people.
Animal was contacted and she said they would regularly contact them and check the shelter.
His people said they would continue to look for him.
Posted by Renting With Rex at 1:38 PM No comments:

Diplo has been found and is safe at home!!

Diplo is an indoor/outdoor two year old grey DSH who is microchipped but not wearing a collar. It is unknown why she didn't come home one night, despite a regular schedule of always being home at night.

The track we found led away from the street and around and around the neighborhood and led out of the area and all the way to Lake Merced after six miles. There is a possibility that she was picked up by a person and carried out. The two tracks are similar of a cat walking and a human walking out of the area.

Her person said she would continue to look for Diplo.

Posted by Renting With Rex at 11:30 AM No comments: 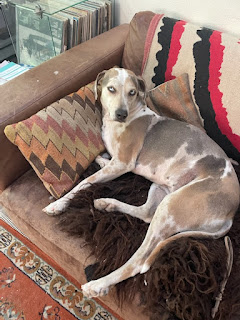 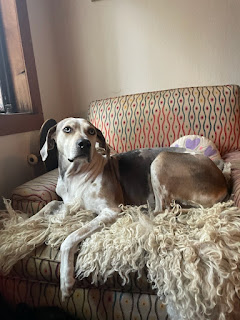 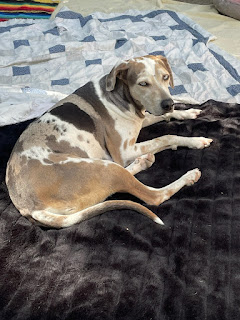 Banchee is an eight year old Catahoula mix who is microchipped but not wearing a collar. She got frightened of fireworks going off in the neighborhood from a house she was visiting.

There were no sightings of Banchee after she went missing despite an extensive search. She is afraid of other dogs and people also, which could make it difficult to physically catch her.

The track we found led all around Oakland and eventually onto International Blvd, heading south towards San Leandro.

Banchee"s person said she would continue to look for her and stay in the area until she was found.

Posted by Renting With Rex at 3:39 PM No comments: 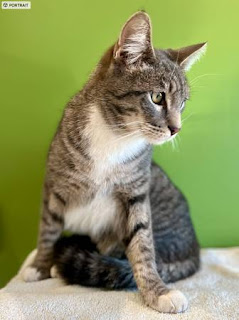 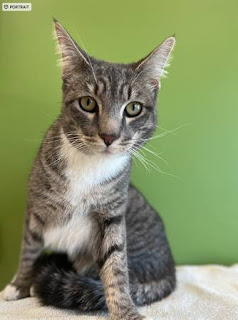 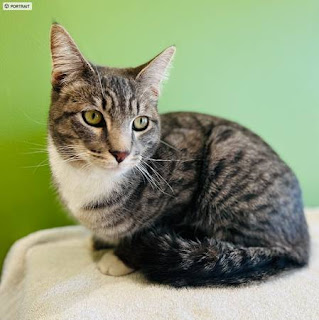 https://strava.app.link/wMfb13V38sb
Leo is an indoor/outdoor, microchipped 11 month old DSH. He was not wearing a collar. It had come off a week before with his GPS tag.
He was last seen by his person at 5 AM on a Monday when she was inside the house.  There were no sightings of Leo prior to our search. There are several homeless camps nearby under freeways.
The track we followed around Oakland and Berkeley appeared to be that Leo had been picked up and carried away. Since the trash was picked up the same morning that he went missing, it appears that a transient/homeless person picked up Leo on his rounds of picking through the recycle bins that were put out on the curb. Leo's person confirmed that he is friendly with strangers and will approach them.
Leo can get away from that person at any time and make his way back home, but he will face along the way other territorial animals. His person did put up flyers along the way of the search to alert people. Also, since the search crossed the borders of both Oakland and Berkeley and both have government and private shelters, I recommended that she contact all four shelters to alert Leo of being missing in case he shows up at any of those shelters, in addition to the county shelter in Dublin.
Posted by Renting With Rex at 12:07 PM No comments: 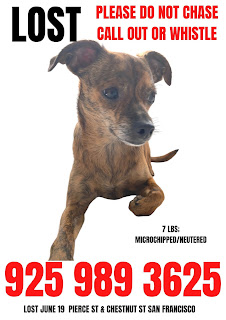 https://strava.app.link/QcXaKGHdbrb
Morty is a four year old dark brindle Chihuahua mix. When he was being walked by his person at 1:30 AM he was wearing a harness attached to a leash. Somewhere along the line after becoming lost, the harness and leash came off and was later found.
There were numerous possible sightings but none could be confirmed, so we started back at the last place his person was known to be holding the leash and walking him. Asia did pick up on a track that led all around the area and eventually went into Golden Gate Park.
The search was stopped at 4 hours and Morty's person said he would continue to look for him.
Posted by Renting With Rex at 12:48 PM No comments: 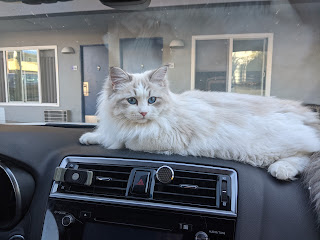 https://strava.app.link/lZo30gaNFqb
Found!!!!!
I received an email that Nadja returned home after being missing for a week. The construction crew noted her sitting on the back fence and informed her people!! I was told she was very hungry, thirty and disoriented, but was resting at home.
Nadja is an indoor/outdoor, white with grey year old Siberian. She went missing from her home one evening when she didn't come home from dinner. She is wearing a collar and she is microchipped. There has been no sightings of Nadja since she went missing. She was seen by construction crews at the house around 4 PM when they left.
The track we found led around the neighborhood and then straight north for over a mile, all the way into Berkeley, and then it went around and around all over the streets and neighborhoods. The search was stopped at 4 hours and they said they would continue to look for Nadja.
Based on the track we found and the lack of sightings, it does appear that Nadja was picked up near her house by someone, probably a transient looking for recycling from cans since the trash was picked up early the next morning. Once we got to Berkeley, it did appear that somewhere she got loose because the track was a lot more random and chaotic, more like a loose cat, than a human being walking.
Unfortunately, this is common with cats since they are easy to carry and don't require to be walked like dogs.
Posted by Renting With Rex at 12:08 PM No comments: 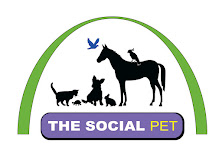 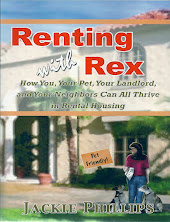 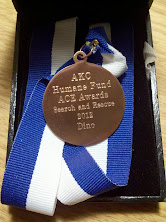 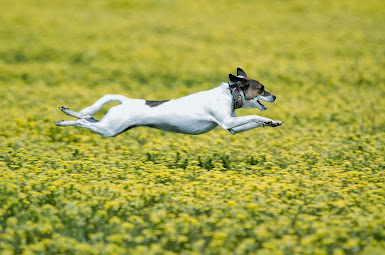